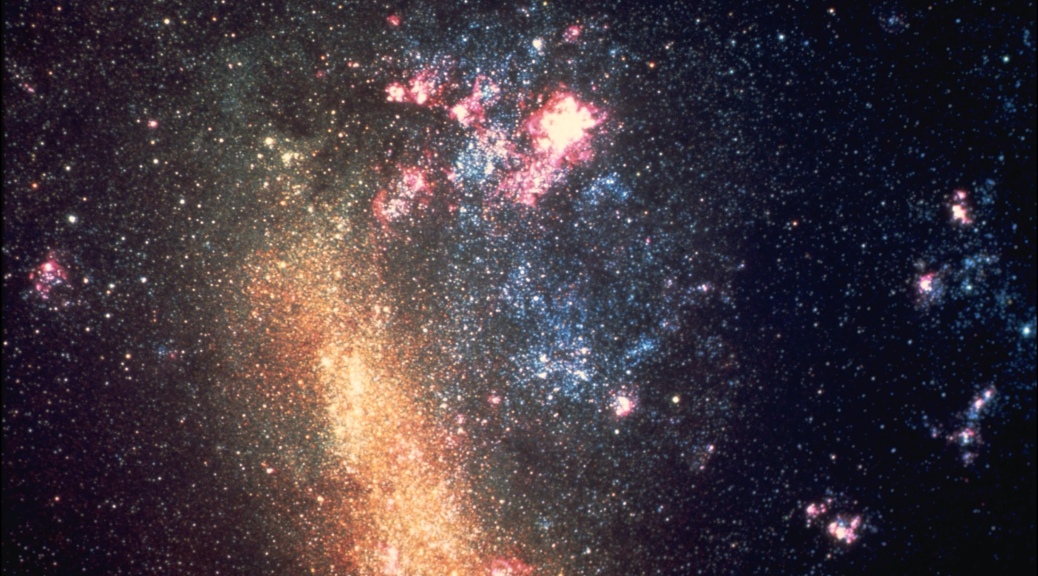 One problem I have in connecting with those of other religions, even other pagans, is that I am never sure if our definitions of divinity are compatible. The gods of others are, if not human, at least recognizable. They have faces, shapes, voices, things that can be known and are knowable. Even the Judeo-Christian YHWH, who supposedly cannot be looked upon with mortal eyes, still is often given the imagined form of an old man with a beard.

For better or worse, a god is often considered to be Like Us, But Bigger. It leaves me feeling profoundly awkward regarding many of the gods I worship.

Consider the most powerful god of my pantheon. It is often called a he, but this is linguistics—it has neither sex nor gender. Is it an insult to refer to a god as “it”? Often it would be, but in this case, it’s hard to even say if it is sentient by a common definition of the word.

It is, for lack of a better metaphor, the one perfect random number generator.

“God does not play dice with the universe,” Einstein is famous for saying, and this could be said to be partially true. It does not play dice with the universe—it is the dice. It is perfect, in that every single possibility is created without fail, and random, in that nothing repeats except by chance. An infinite number of universes sprout in every second, each one different from the next, and there is no ulterior motive for their creation. It does not create the universes for something. It simply creates.

The possibility of anything occurring, given infinite time and infinite universes, eventually becomes 100%. On the multiversal scale, everything is inevitable. Hence, a being of perfect randomness is legitimately omnipotent. The familiar paradoxes are thwarted. “Can it create a rock too big for it to pick up?” Yes. On a regular basis.

This is a chaos that I do not often see represented in modern paganism. Many practices have a notion of a primordial chaos from which gods sprung and the world was created—indeed, the word “chaos” itself derives from the Hellenist tradition, the Chaos from which Gaia, Tartarus, and Eros arose. Some argue this Chaos should also be regarded as a god. To others, it is just the nothingness before there was Something.

It would be false, in my opinion, to regard it as a non-existence. Things are not so static. The universes were not created and then left to exist forever after. The multiverse is perpetually being born from chaos, growing infinitely in size for as long as time exists. It is strange in its power, but that power still exists.

“Is this even a god?” some would ask. “Isn’t this more like a natural force, like gravity? If you cannot personify it, is it a god?”

They have a point. Worship of a chaotic god, in the newest sense of a god who disrupts order or the illusion of it—this has its own obvious benefits in the opening of the mind from a narrow viewpoint to accept a larger understanding of the universe. Eris, Loki, and trickster gods in general take away the false and leave a truth in its place, even if the method involves nonsense and lies.

But this is not chaos as in the dismantling of illusion that trickster gods do so well. This is the Dice That Rolls Itself. Worship of something this alien seems somewhat pointless in the sense of begging a god’s favor—after all, it would seem that by nature it cannot intercede, would never intercede, as that would counter the perfect randomness through which it creates.

Of course, to that I can bring forward the equally valid point that this alien god, as described, coincides unnervingly well with the causal element of Chaos Magic.

Consider the world of apparent dualisms we inhabit. The mind views a picture of this world in which everything is double. A thing is said to exist and exert certain properties. Being and Doing. This calls for the concepts of cause and effect or causality. Every phenomenon is seen to be caused by some previous thing. However this description cannot explain how everything exists in the first place or even how one thing finally causes another. Obviously things have originated and do continue to make each other happen. The “thing” responsible for the origin and continued action of events is called Chaos by magicians. It could as well be called God or Tao, but the name Chaos is virtually meaningless, and free from the childish,1 anthropomorphic ideas of religion. Chaos is also the force which adds increasing complexity to the universe by spawning structures which were not inherent in its component parts.

Therefore, it may not be entirely right to make assumptions about the benefits of calling upon the Dice That Rolls Itself. If the probability of all things on the largest scale is 100%, then even the impossible cannot be eliminated. All things means all things.

I am personally inclined to believe in worship for its own sake, respect of something much larger than oneself simply because you cannot help but do so. But this is my preference. A bias, not a universal truth.

This is the awkward part where I confess that most of my active practice is in worship of a god of order. But I know full well that order bows to chaos, that order rose from chaos like a flipped coin coming up heads fifty times in a row. Order was only inevitable because the randomness was perfect enough for all things to happen.

Let us all pay our respects to that which means we exist.

1For what it is worth, I disagree with Carroll’s own bias that an anthropomorphism is inherently “childish”. A familiar visage would be unquestionably useful for a god who deals with humans on a regular basis. Why not appear human, if it suits them? If the modality of my mind is such that a human-like god inspires more doubt than faith, then either such gods would avoid me and save themselves the trouble, or they would wear a more suitable mask.

2 thoughts on “C is for Chaos”

A Kemetic and Illustrator with an obsession for Ancient History

From a Follower of the Ibis

Confessions of a Magickal Practitioner in Oz...

Ramblings, dry humor, and the occasional informative piece from a crazy wolf

The Rhetoric of a Hard Polytheist

Dawn of the Two Feathers

The Wytch of the North

All spiritual life begins with a sense of wonder, and nature is a window into that wonder. - Richard Louv

Strip Me Back to the Bone